10 ridiculous (but completely real) excuses for not paying Minimum Wage 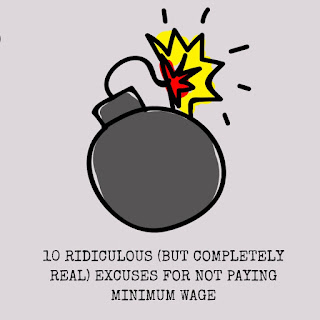 Yes, these are real excuses that business owners have given HMRC to explain why the law about minimum wage rates simply doesn’t apply to them:
We could provide commentary on WHY all of these bizarre excuses are completely and utterly wrong … But some things just speak for themselves.
It doesn’t matter who the business owner is, what their accounting arrangements are, whether their workers are performing at the desired level, are pieceworkers, home workers, agency workers, commission workers, part-time workers or casual workers. The fact remains that if they aren’t paying minimum wage, they’re breaking the law.
This lame excuses list has been released as part of a nationwide campaign to raise awareness among the low paid about their minimum legal wage and flag up cases of non-compliance to HMRC.  Anyone who thinks they may be paid less is being encouraged to contact ACAS as soon as possible, and every call is followed up. HMRC’s enforcement budget, used to fund the number of compliance officers investigating minimum wage complaints, is £20 million a year and will increase by another £4.3 million this April.
The consequences for your business of underpaying staff what they’re legally entitled to receive could be dire: here's more about the level of fines being imposed by HMRC.
As a refresher, the current National Living Wage for all employees aged 25 years and over is £7.20 an hour.  The National Minimum Wage rates are currently:

The rates rise again a little in April 2017: watch this blog for an update.

Enforcement of minimum pay really has some teeth and pay rates need managing carefully to ensure the right one is applied.  Employment law can be complex, and we understand that dealing with it can be a hassle.  That’s why we’re here to help.  If you’re unsure about where you stand and what you need to do to keep your business on the straight and narrow, give us a call today at The Human Resource on 07884 475303.